I’m a big fan of Happy Together 해피투게더, a famous Korean variety TV show. I love listening to the guests’ stories and especially their Late Night Cafeteria segment 야간매점 where cooking is involved.

The taste of memories that can’t be forgotten.
Special recipes that aren’t in any cookbooks but found in our homes.
Evil recipes that you want to try as soon as you see them.
Creating the best flavours with minimum costs.
Happy Together’s Late Night Cafeteria!

I knew I’m going to try Lee Jong Hyuk 이종혁 winning recipe called Dumpling Skin Churros or Mandupi Churros (만두피 츄로스) someday when the opportunity come knocking. And yes with the recent dumplings making project, I have some leftover dumpling skins which is perfect for this recipe. You be the judge whether it can be called churros since I’ve never eaten churros before. 😛

In a plate, add 3 tablespoons brown sugar and 1 tablespoon cinnamon powder. You can use white sugar as well. Combine well.

Place one dumpling skin on another plate. Brush water on the surface of both side. This will act as a glue.

Repeat on the other side as well.

Roll the dumpling skin like a cigar and brush off excess sugar+cinnamon.

Repeat until you’ve used up all the dumpling skins. Now they’re ready for frying.

Heat oil in a saucepan and deep fry these rolled dumpling skins until golden brown. Remove excess oil and serve within 20 minutes while it’s crunchy.

Those dark spots I guess are either too much cinnamon powder or brown sugar. They taste a lil’ bitter (sugar?). Guess I must’ve over-fried them but funnily the flames are low and they didn’t stay in the oil for very long time… at most less than a minute. I’ll try with white sugar next time.

Anyway this is a really addictive snack! It’s not really healthy so don’t eat it often but it makes a great finger-food for your hungry guest. Don’t leave it for too long or it will get soggy.

2. On another plate, place a dumpling skin and brush both side with water. 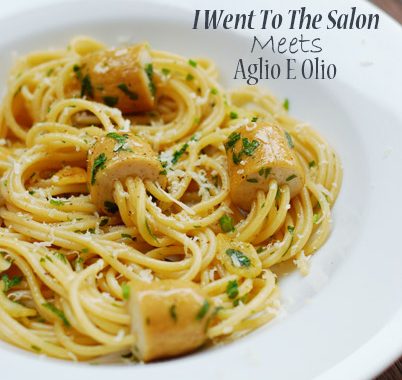 I Went to the Salon Meets Aglio E Olio Spaghetti