Mentaiko pasta (明太子パスタ) is a Japanese-style pasta or fusion pasta or in Japanese, wafu pasta (和風パスタ). This style of dish in Japanese cuisine is called yōshoku (洋食) or wafu food (和風) which incorporates Western cooking style with Japanese. Some of the best known examples of yoshoku dishes are katsu (e.g. crispy chicken katsu チキンカツ), omurice, korokke and pasta.

Every time I eat this mentaiko pasta, it reminds me of cacio e pepe, an Italian cheese and pepper pasta. Both excel at highlighting their main ingredient(s) and making ’em shine. They give our tastebuds the utmost pleasure and delight! I knew mentaiko pasta is a keeper the moment I tasted it.

Don’t play-play. It may look plain (ok la I skipped the garnishes) but mentaiko pasta is no plain Jane.

Karashi mentaiko (辛子明太子/辛子めんたいこ) or popularly known just as mentaiko (明太子/めんたいこ) or mentai (明太/めんたい) is the roe of Alaska pollock (walleye pollock) – a species of cod, that has been salted/cured and seasoned with red chilli peppers, other ingredients and usually colored red. Do you know what is a roe? Roe is a bunch of tiny eggs encased in the sacs of the ovaries of a female fish or a bunch of released eggs. Two ovaries are connected together in a pair. The elongated ovaries look like bulky sausages (or ahem testicles) except they’re no sausages but a delicacy prized by many traditional cultures in the world and for good reasons too.

Karashi mentaiko originates from Korea. It’s based on myeongnan-jeot (명란젓) aka fermented pollock roe, a type of traditional Korean fermented salted seafood (젓갈 jeotgal). Karashi means spicy. Additionally, the word mentaiko is borrowed from the Korean word myeongtae (명태/明太/Alaska pollock) and ko, a Japanese word for child (알/子/roe). So, it means mentaiko is the child of Alaska pollock. Cool, right?

Then there’s the story of tarako (鱈子/たらこ) which like mentaiko (明太子/めんたいこ) is also made from Alaska pollock roe and salted/cured. However, tarako is plain while mentaiko contains red chili peppers. According to the National Karashi Mentaiko Food Fair Trade Council, a product can only be named karashi mentaiko if it uses the roe = ovaries + eggs of Alaska pollock (walleye pollock) salted/cured, seasoned with red chili peppers, etc. Tarako on the other hand is mainly made from the roe of Alaska pollock (walleye pollock) but it can also be made from the roe of other fish like the Pacific cod and still be called tarako.

These are the packets of karashi mentaiko and tarako that I bought recently. Please excuse the blurry photos as they were taken using a low-quality handphone camera. I photographed them so I can translate the words. 🙂

Karashi mentaiko 辛子明太子 70g from Hakataya 博多屋. It’s salty and umami. The deep red color is due to the red coloring plus other unnatural ingredients used. 🙁 My dream is to find mentaiko that’s 100% natural. The weirdest thing about this Hakataya mentaiko is that it has an almost undetected spiciness.

Tarako たらこ 90g from Towa Foods has been sliced in half, turning the pairs into 4 pieces. It’s also salty and umami but tastes less of seasoning. Definitely tastes very different from Hakataya’s karashi mentaiko. The color is also paler compared to Hakataya’s mentaiko. I’ve no idea of the ingredients for this one as it was blurred out. I’ve used tarako to make yellowfin tuna tartare before (shared on my Instagram).

I think that’s about it. I’ve babbled too much.

But you can’t cook mentaiko pasta without mentaiko. So, where can you buy karashi mentaiko? You can find it at Japanese, Korean or Asian grocery stores, both physical and online.

There is no substitution for karashi mentaiko. Tarako seems to be the most likely substitute but tarako and mentaiko offer different flavor profiles, so it won’t be the same outcome. Try mentaiko and tarako side by side if you’re able to get both of them at the same time. They are two totally different food. However, if you want to make tarako pasta/spaghetti, please go ahead. But know that it will be a new dish.

Updated November 2022: I tried tarako spaghetti twice so far already and while they do have some similarities (in terms of taste and aroma, they share some similarities and yet different), the umaminess and saltiness are on different levels. I definitely preferred mentaiko pasta over tarako pasta. However, if you like more subtle pasta, then tarako pasta is the better choice.

Cook the spaghetti according to the instruction on the pasta packaging. I’m using organic spaghetti and the cooking time is 8 minutes for al dente. You can also use a different kind of pasta.

While cooking the pasta, prepare the mentaiko sauce.

Mentaiko is stored in the freezer to maintain its freshness. If you’re using the mentaiko on the same day of purchase, you can store it in the fridge temporary. Defrost one ovary sac of mentaiko until it becomes soft to handle.

Carefully, using your hand, break/tear the thin elastic ovary sac. Then, use a bread knife to lightly scrape out the eggs inside. Do not discard the empty ovary sac but eat it while prepping the dish. It’s very salty and has a weird texture but delicious. Don’t waste ya. Also, try a few of the tiny eggs. You’ll notice it’s soft and won’t pop like tobiko.

Use a spoon to simply mix the ingredients. You don’t have to be thorough as you will be mixing it again with the cooked spaghetti which will melt the butter. I know it doesn’t look like a sauce but this is the lazy time-saving way of doing things. Haha

Mentaiko pasta is packed with umami and is not fishy at all. It’s my kind of comfort food. There’s just something about it that I don’t know how to describe. But I do know that you want to try it for yourself and the first bite will start off an automatic reaction: eating mouthful after mouthful of pasta. And when you’re done eating, you smile because you just had one of the very best pasta in your life.

Although mentaiko itself is salty, mentaiko pasta isn’t salty at all. It’s seasoned just right and in my case, I cannot detect any spiciness save from the pepper. I categorize mentaiko pasta as a DIY fast food. It would be a healthy DIY fast food if not for the unnatural ingredients used.

Mentaiko pasta is so easy and quick to whip up whether it’s on your lazy days, when you need a pick me up or when busyness strikes, It’s definitely the answer to my woes. Woo to the Young to the Woo, Men to the Tai to the Ko!

p/s: Photos are showing the messiness of the mentaiko pasta plate because I used the same plate to mix and eat – save time! Also, there’s something else on the plate (1st photo & 2nd last photo). Can you guess what it is?…… It’s a strand of hair!

Yes! The moon and stars finally align and I’d tried shiso leaves (ōba) on mentaiko pasta. I don’t have kizami nori though. I always thought shiso leaves have an almost similar aroma to Korean perilla leaves. Ohh how wrong I was. Both are totally different in aroma and texture. Korean perilla leaf has a more aromatic kick to it while shiso’s fragrance is more subtle.

2. While cooking the pasta, prepare the mentaiko sauce. Carefully break/tear the thin elastic ovary sac with your hand. Lightly scrape out the eggs inside the ovary sac using a bread knife and place the eggs aside on the plate. Feel free to eat the empty ovary sac. I always eat it. Next, add butter, shoyu koji, milk and freshly ground black pepper on the plate. Simply mix everything with a spoon. It’s okay if the butter is still solid as you will be adding cooked pasta over it. 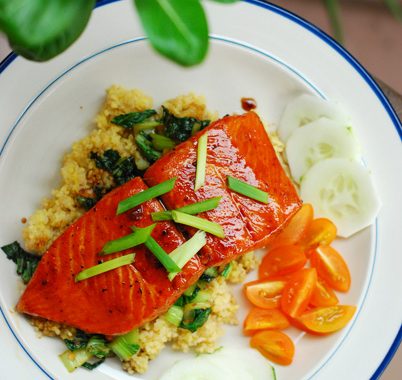 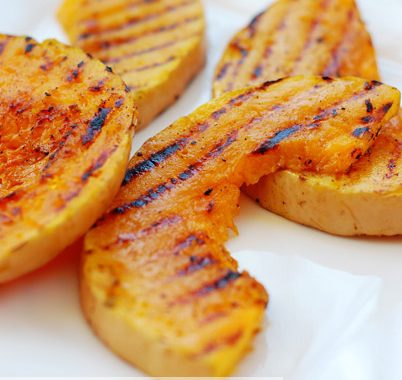 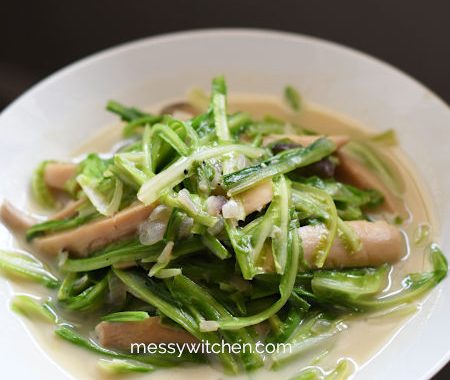 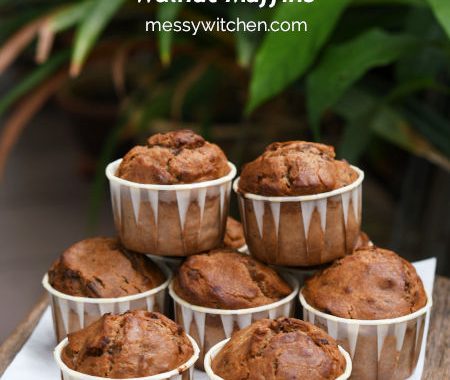 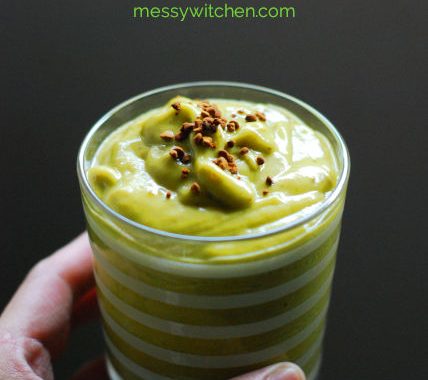 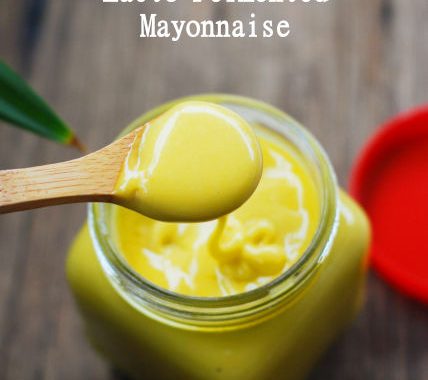