Are you a fan of ang ku kueh? I certainly am a BIG fan. The thing is when I was young, I disliked eating the outer skin as it can be tough to chew, so I only went for the oh-so-yummy and fragrant mung bean paste filling. Don’t worry, I eat everything now. 😛 Do you know that besides eating ang ku kueh as is and steaming it, you can also pan-fry the ang ku? If you have not tried it before, then you must give it a go!

Growing up, whenever we have leftover ang ku, my late grandma would pan-fry ang ku kueh for us. Yes, I ate everything when she cooks it this way. However, due to old age, she stopped making it. I kept saying to myself “Soon, one day I will make it for grandma and family.”, “One day!”, “One day ya!”. That one day was during our first CNY without grandma. I was too late! Nevertheless, I just knew I must continue this tradition.

These pan-fried ang ku kuehs may look blistered and ugly but wait until you try one! 😍🥰🤤

Psst, ang ku kueh can also be spelled as angku kueh, ang ku kuih and angku kuih. Doesn’t matter how you spell it, what matter is this recipe is SUPER SIMPLE! It won’t be long when you’re craving it big time. Hehe

We have an abundance of ang ku kuehs on the 9th day of CNY. These are some of the leftovers from the fridge. They are in the shape of traditional Chinese coins and pigs/piglets. We also have the regular tortoise shape (where the ang ku name is derived from; ang = red, ku = tortoise) and another one in peach shape for Chinese New Year. A tortoise has a very long life, hence it signifies longevity. So, eat more ang ku, but also eat the other shapes as well because they all have meaning.

Pan-fry the ang ku kuehs on a skillet over medium-high heat. Use any fat/oil you like. I tried it with lard and coconut oil and loved the ones with lard. The lard will impart its unique flavor to the pan-fried ang ku.

Leave some space between the ang ku kuehs so they don’t stick together when frying. Pan-fry the ang ku on the skillet on one side until there is no resistance when you move it, then fry on the other sides. When the ang ku stick to the skillet, it means the frying is not complete yet. You can also choose to fry only on the top and bottom sides.

Also, be careful when cooking the ang ku as it may naturally or you may accidentally puncture the skin when it’s soft and the mung bean paste will ooze out. No problem there. If you see my photos, you can see some mung bean paste on the skin. Do reduce the heat if it gets too hot.

Plate it up and share it amongst your family and friends. You’ll either bring ’em down memory lane or show them a new old way to cook ang ku kueh. This traditional recipe needs to be introduced to more people so that this tradition is not lost for the generation to come. Everyone needs comfort food or two or more and pan-fried ang ku kueh is one that will bring you home!

Crispy and crunchy on the outer skin and gooey on the inner skin with soft warm filling. This is heaven!

If you have had this growing up and/or present day, come give this post a shout out by leaving a comment below. Share with us your memory.

Method:
1. Heat a skillet over medium-high heat and add fat/oil to about 3mm-5mm. I use lard as it makes the pan-fried ang ku even better.

2. Once the skillet is hot, place ang ku kuehs and remember to space them so they don’t stick with each other.

3. Pan-fry the ang ku on one side until you are able to move it without any effort. Then, change side and repeat, until all sides are fried or fry only the top and bottom. As the ang ku is fragile when it’s hot, it may break naturally or due to rough handling and the mung bean paste will flow out. Also, add more fat/oil if there is not enough. Anytime the heat is too hot, change it to medium heat.

4. Repeat until you have cooked all the ang ku kuehs.

5. Very awesome when it’s served warm. Can be served at room temperature as well. 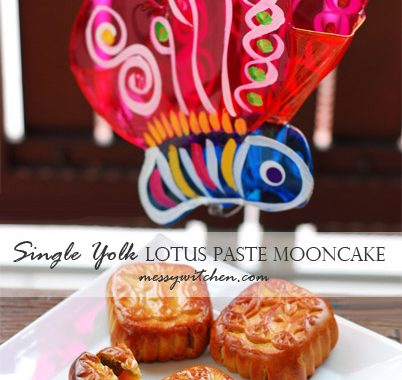