We spent the last night of our Taiwan trip (day 5) at Ximending, Taipei. This place reminds me of Myeongdong in Seoul. It’s mainly a stomping ground for the young generations and tourist. There are plenty to see, shop and eat in Ximending 西門町. To get to Ximending, take the MRT to Ximen station (exit 6).

The first thing I check out was the mee suah from Ay-Chung Flour-Rice Noodle 阿宗麵線 (pronounce as ah-zhong-mian-xian). I’ve seen lots of blogs talking about Ay-Chung and always wonder whether it’s as good as people said.

As soon as we near the shop, we can see how popular this eatery is. There are practically 3 groups of people here; those that queue at the long but fast moving line, those that stand scattered around eating their mee sua and those that stop to see what the fuss this is about or just wanna pass through.

We ordered two small bowls to be shared.

Looks so sinfully delicious. This bowl doesn’t contain any condiments yet. No chili, vinegar and garlic. I gotta say the taste is pretty similar with the one I tried at Ningxia Night Market. They are equally smelly due to the intestines and the mee suah at both places were smooth and slippery. But the broth here is so much richer.

After a couple of bites, we added the chili, vinegar and garlic. The condiments are located at the self-service station.

How does it taste now? A lot yummier! At least most of the smelly taste has been masked by the addition of vinegar and garlic. And yes, I ate the intestines. Only my second time. My first time was at Ningxia. 😜

When I finished my share of the bowl, I was fully satisfied. It was quite addictive too. The deliciousness, in my opinion was also partly contributed by eating while standing with a large group of people. You get a different feeling. Note: they do provide chairs but very limited.

We were given a spoon to eat which is good because you get to scoop up the broth. However I wish they have chopsticks too. Imagine your mouth is waiting for the mee suah to come in (haha) and you are having trouble scooping the noodles with a spoon. They are just too slippery and slip away from the spoon. I also noticed the amount of rubbish created with disposable bowls.

My verdict: yes it’s delicious but I don’t think I will eat it frequently because I’m not a fan of intestine. Too bad I didn’t get to try oyster mee suah in this Taiwan trip. I think I would like it much better.

Next, we found Hot-Star Large Fried Chicken 豪大大雞排 (located opposite Rainbow Hotel and Watsons) which I had wanted to try at Shilin Night Market but gave up eventually due to gigantic crowds. Here, the line for ordering were quite short. There were more customers waiting for their food to be cooked. They also sell drinks btw.

There is no need to look at the menu. We only wanted to order one thing.

Hot-Star large fried chicken @ NT$70.
The fried chicken was hot to the touch as it just came out from the fryer. Really tested our patience for waiting the meat to cool down. So how was it? The outer crumbs layer was chewy and crispy while the chicken meat was really tender. Overall, it was quite salty. I also tasted msg which makes it addictive. However addictive it may be, this is the kind of food which I’ll only indulge once in a very long time.

We chanced upon a couple of street vendors and I bought onion pancake 葱抓餅 (cong zhua bing) @ NT$25. The pancake reminds me of our Malaysia’s roti canai so it’s just ok for me. I wish I have a bowl of dhal to dip it in. Haha. We also bought milk tea @ NT$30 from Specialized Tea Club (yum!) to quench our thirst cause by the msg-laden fried chicken.

We were full by then but decided to go for one more when we chanced upon this Okinawa Japanese-Style Grilled Mochi stall.

Peanut flavored grilled mochi @ NT$30. Never tried grilled mochi before and I kinda like it. It’s soft and just a little chewy. Do finish it as soon as possible because the mochi will turn really soft and fall off the stick.

We considered another fried chicken shop before leaving Ximending but decide better NOT! 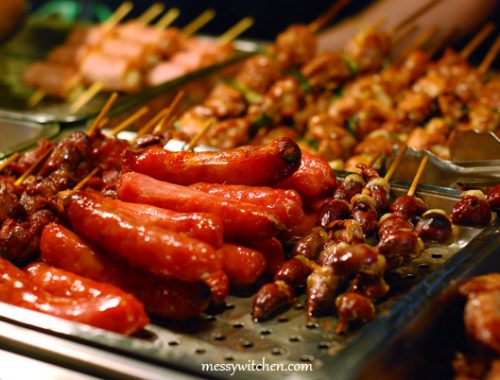 Ningxia Road Night Market: Some Good Food, Some Not 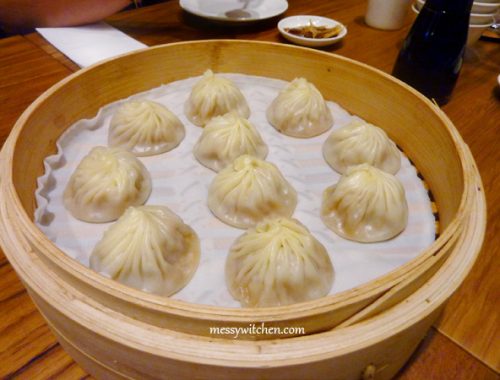 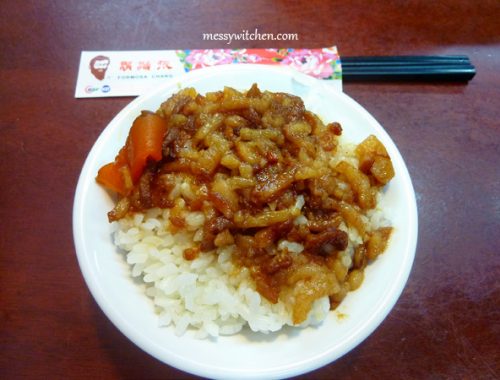