After shopping at Gangnam Underground Shopping Center on day 14 of our South Korea trip, we searched shops near to Gangnam subway for lunch. After much dilly dally, we settled on 유가네닭갈비 Yoogane Dalk Galbi Restaurant. Reason because we wanted to try dalk galbi and also cooking on our table experience. Dalk galbi 닭갈비 is stir-fried marinated diced chicken with gochujang (Korean chili paste) with vegetables.

Yoogane’s menu. We ordered the very first one with the writing ‘Best’ on it. It’s marinated chicken galbi fried rice. At the bottom of the menu are adds-on. We ordered ‘Special combination’… the one with double sunny side ups (bottom left).


More food for you.

All the ingredients for cooking except the yellow radish (bottom).

Sides (banchan): salad and kimchi juice. I’ve never had restaurant serve me kimchi juice. Not sure what to do with it. Haha Sides not seen in this photo are kimchi and yellow radish.

As you can see, my mom has her hand folded while the waitress cook for us. She starts with chicken marinated in gochujang and spring onions in a large frying pan. I saw some tables were given aprons to wear but we didn’t get it. Perhaps they only give to those who ask?

The waitress then cover the surrounding with a large rounded steel to prevent the grease from splattering our clothes.

By this time, I was salivating. Smell so nice.

The lunch was totally yummylicious. For my standard, the spiciness was just right. We even receive a small bottle of carbonated drink free of charge or what Korean like to call ‘Service’. Would love to go back for more when I visit Seoul again.

Yoogane Dalk Galbi is a chain restaurant. They have branches in Myeondong and Hongdae. They’ve been operating since 1981. 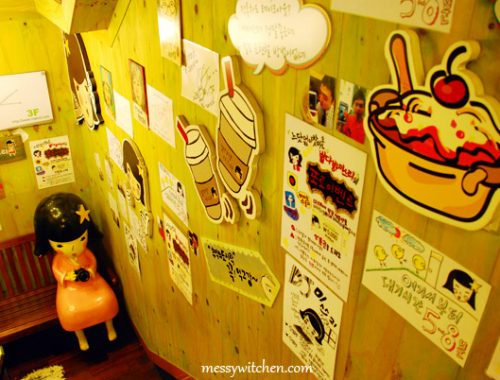 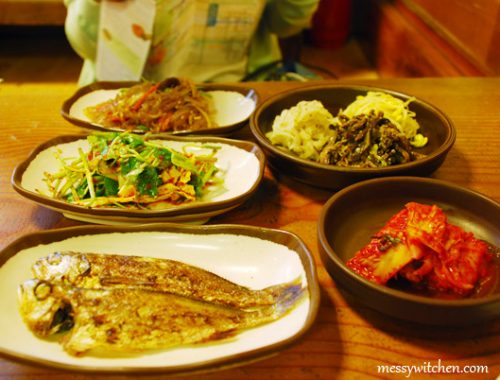 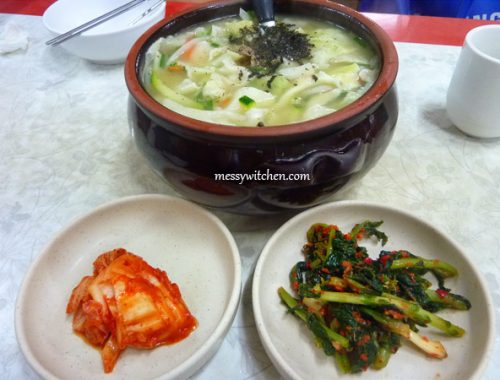